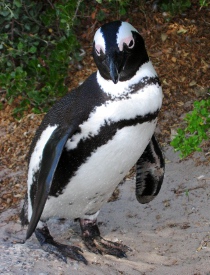 Keith is a man that once stood on the street a block or two from my house. I don’t know if he was homeless, or just unemployed, but he was asking for money regardless. His smile masked the hardship of his situation.

Janice used to sit near my office. She was almost always there as I walked to work. Two milk crates provided her a chair to sit on. A cardboard sign told a snapshot of her story: homeless mother, needs food.

In each case, I knew them only because I paused long enough to ask them their names. The next time I saw them, I didn’t just say hello. Rather, I used their names: “How are you, Keith?” or “Glad to see you, Janice.” It changed the way we saw each other.

Names are a recognition of existence.

There is a beautiful greeting in the Zulu language: Sawubona. It means “I see you.” In that greeting is an acknowledgement of presence and worth. Saying someone’s name is Sawubona taken to the next level.

We all want to be recognized, no matter who we are. We all want people to tell us that they see us. Greet someone with their name and they will be seen.

Names describe the people that own them.

In the Christian Bible, God is known by his names – the Provider, the Creator, etc. The Koran describes Allah with the ninety-nine beautiful names. While most of us, Muammar Gaddafi excepted, don’t have that many names, the ones we do have represent us.

Sometimes the name itself may have special meaning. Janice means “Gift of God.” That is a perfect description of her. Most often though, the meaning is you. Who you are becomes part of the name.

Names are the doorway to conversation and relationship.

When I paused that first time to say hello to Janice, I had no idea that the conversation would last for almost a year. We’d talk about her children and how they were grown up and living far away. When she injured her leg, I’d ask how she was doing. If the day was sunny, we’d rejoice together. She almost always complimented me on my hat.

Keith always greeted me with a smile that was big and warm. He asked how I was doing. He petitioned me to pass on his greetings to my wife. I enjoyed talking to him, even if the conversation was short.

I knew only a portion of their stories, and they knew little of mine. But that little bit was valuable. Shared humanity, no matter how small, is important.

Names are an opening to generosity.

Rarely did Keith or Janice ask me for money or even food. The need was there, but somehow my remembering their name and taking a few minutes from the day to acknowledge their presence was a gift enough.

But I gave anyways. Sometimes at the farmers market, I’d get Janice the best apple I could find. Other days, I’d put a dollar in her tattered coffee cup.

One time I got Keith some hot dogs from the nearby grocery store. When I saw him a week later he told me how much he had enjoyed them and how he was making them last. His smile gave away the truth in his words.

They gave to me too – not in money or food, but of themselves. Their smiles and kind words brightened my day. From their hearts they blessed me. I wonder sometimes if I was the one that benefited most from the relationship.

Names are the beginning of dignity.

It would be easy to focus on the differences between Keith and me. I was employed at a well paying job, he wasn’t. I rarely go hungry, yet he was begging for just enough money to eat. But the differences, although significant, took a lesser role than they might have otherwise.

I haven’t seen Keith or Janice in a while – their place along my pathways now taken by others. I miss them though. Their smile, their kind hello, and their humanity are a warm memory. Their names still echo in my heart.

Yet part of me is glad not to see them. They deserve so much more than a street corner. Perhaps they moved on and found something better. I hope they did.

Hello, my name is Curious. What’s yours? I made this photo at Boulders Beach in South Africa.